Being a National Councillor in the NTEU

(or.. NTEU and Transphobia 2: Redemption)

This was my first in-person national conference (previous two have been Zooms), and if I could describe it in two words, it’s “solidarity” and “exhausting”.

In this post we use the FreeDOS VM to run MS-DOS 1.25 and play with the system a bit.

I want to see how well I could run/upgrade various versions of MS-DOS and Windows through the generations, all on Hyper-V. In theory I think I should be able to upgrade through the ages, but the jump from 32-bit to 64-bit might be a problem. I will attack that when I come to it (Windows 10/11). I’m not sure if I’ll go all the way through or not, but I’ve started a bit tonight, and I thought I’d document the process.

Reflections on NTEU, Elections, and the Future

Edit 25/07/2022: Sarah Roberts (from Better Workplaces) contacted me to clear up some of the things I said below. With her permission, I am pasting the whole email:

First, apologies for the long email! I saw your blog post this morning and thought I would reach out to you around a couple of things you said in it.

The first is around the all-member email that went out advertising the “Enterprise Bargaining: Campaigning to Win” event on 2 August, about which you said “In my mind this is nothing but National, with the help of people in Div (some on the Better Workplaces ticket), playing dirty.”

I want to let you know that this forum was organised without my knowledge, and without Ruth, Joo-Cheong's or Adam's knowledge either. The first I heard of it was when I received the all-member email myself. I dug into it straight away and discovered that another staff member had organised the forum and sent and sent out the email off their own bat. As a member of the UniMelb bargaining team I was concerned by the fact that it had been organised at exactly the same time as the UniMelb log of claims approval meeting, at which we need to get a 400-member turnout. For this reason, I asked that the forum be pulled immediately. It's simply not the case that our ticket was playing dirty in organising this forum – we didn't even know about it.

The second is where you say “A lot of these wage theft campaigns have been helped by Div/National but started by casual networks unaffiliated with Div/National. Instead, they’re rank and file groups of people fighting for a common cause. Then they start to get traction and Div/National swoop in like Bill Shorten in a robodebt lawsuit. I’m sure the Div/National help is very welcome, but we need to acknowledge where it all started.”

First, I must reject your posing Div / National and the rank and file as a dichotomy – in my view we are all part of the one union with collective cause (or should be). Second, though, I want to explain my own involvement in the wage theft campaigns you're referring to so there can be no misunderstanding.

The basis of our success in all wage theft campaigns that have occurred to date has been enforcement of our existing rights, in particular rights around separate pay for marking and payment for all hours worked. Separate pay for marking was something we achieved in Round 5 of bargaining in 2012, at the initiative of the (then) National Casuals Committee, which I was instrumental in agitating for and establishing. I bargained for it and achieved it at several sites including at the University of Melbourne. In relation to the right to payment for all hours worked, again this was something I pushed at the University of Melbourne in bargaining, and won (might I say, without any particular rank-and-file casual involvement or support for it). My purpose in achieving these enforceable rights was always with the strategic purpose of running successful enforcement campaigns.

Subsequently I agitated at the University of Melbourne Branch for a campaign around breaches of the new payment for all hours worked provisions (wage theft). The casuals who were involved at that time weren't ready to run that campaign, but then, due to the sterling work of Branch activists like Annette Herrera, Geraldine Fela, Ben Kunkler and Nick Robinson, the casuals network was formed, courage was built over the next 6 months and we were able to run that successful wage theft campaign, winning back $10m in stolen wages for casuals. In my mind this was a collective effort, but in no way do I want to take away from the work of casual activists on the ground – every element is crucial in a winning campaign.

We then went on to run similar campaigns at RMIT (academic judgement rates of pay), La Trobe (piece rates) and now Deakin (again, piece rates). The casuals activists and the Branch leaderships there can tell you about the strategic role I've played in each. Collectively these campaigns have achieved success through, in my view, a combination of factors, in order: 1. establishment of enforceable rights 2. identification of enforcement / campaign opportunity 3. development of dispute plan with evidence-gathering via casual networks or similar 4. organising via Branch and casual networks, using digital and other tools 6. lodgement of dispute with management 7. rank-and-file participation in disputes meetings with management 8. further enforcement in FWC / courts if needed 9. LOTS of media 10. THE WIN!!

I really hope, whoever wins this election, we can move beyond posing the rank and file against the Union leadership, and achieve some unity. We all want the same thing, which is to win better conditions and pay for members and build our power. I think I've shown through my praxis that's I'm committed to rank and file empowerment and leadership of our wage theft disputes. Casual members telling their stories to management is the most powerful tool we have, and how we can win. But I also think the strategic overview of what we're doing, and the long term strategic plan for building enforceable rights (not just in relation to casual wage theft, but also on workloads and job security) that we can then enforce and win on, is equally important, and I believe that's what I contribute.

Do you like the title? It sounds so professional to me. I’ve been somewhat involved with the NTEU 2022 elections, although I’m not running for any of the ‘big’ office titles. I wanted to comment on what I’ve seen happen so far, and why I think it’s important people get involved and vote this election. In this post I link to the websites of the tickets, but that should just be a starting point if you want to find out more. Finding the campaign and candidates’ public social media accounts (Twitter, Facebook, etc) can show you who they are.

I was at the National Council meeting, and I feel like I need to write about what I saw/experienced, and how poor it was. It’s been almost 24h and I’m still angry, in part because of what bullshit the NTEU National office is putting out online in response to the cries from their members at what they’re doing.

Setting a Windows 10 computer up w/ existing OpenPGP and Yubikey

This covers getting a new Windows 10 instance working with an existing openpgp setup and yubikey. It doesn't cover creating the openpgp key and linking it with the yubikey in the first place.

I use winget to install my packages, but you can grab the packages individually, or use choco or something else.

As mentioned in the previous Maximite Colour post, the screen works, but is extremely dim. It's dim to the point where if the room is well lit, you can't see anything on the screen, but it's there. I was able to connect to the system on the serial console (baud 9600), and the base system worked, so I definitely screwed something up along the line of the display.

After studying/deciphering the electronics diagram (below) and tracing paths on the board, I think I had figured out what stuff to look at. I also again read a “basic electronics” document that came with the board. Double checking that, I realised that diodes actually have poles. 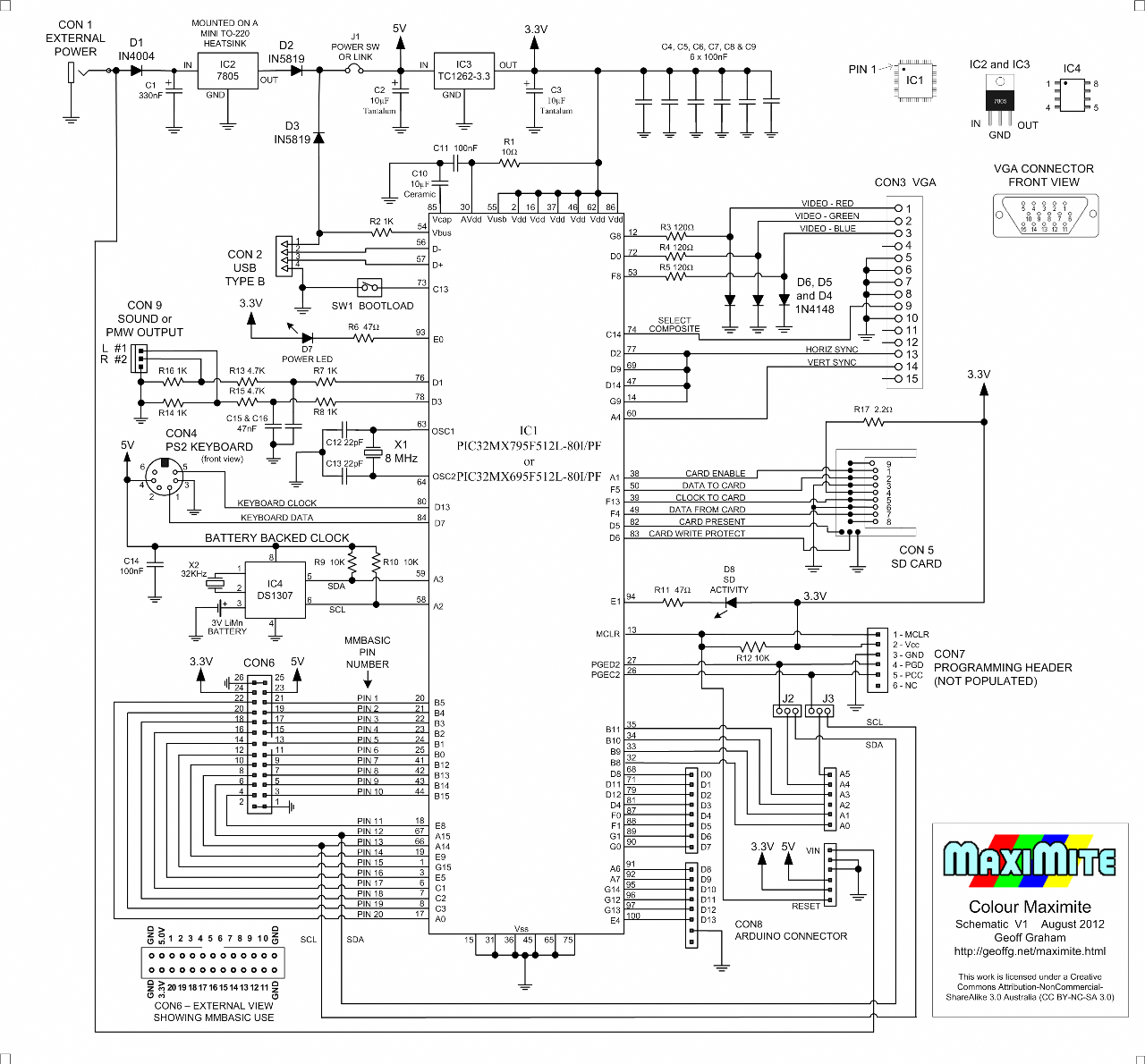 I had two of the three VGA-based diodes placed incorrectly, as well as another one that does.. no idea. I learned how to unsolder, although I'm not great on it, and then soldered stuff properly. Powered it back on and...... same result.

Fixed it! It took maybe 2-3 hours of learning how to use the multimeter for testing connectivity and voltage, and then learning how to use the multimeter in an effective way when trying to narrow down my problem. To review, I soldered the whole kit together, but when I plugged it in there was no activity. The board should do a quick POST and then the green light should light up (and the screen will display stuff if it's plugged in).

I had determined I was getting a proper 9V into the first voltage regulator, and a proper 5V out from it. The second voltage regulator didn't seem to have anything incoming or outgoing, though. I ran through almost every A->B connection I could on the board, testing connectivity, all good. I tried tracing paths on the board, checking voltage between them. I never went end to end though, as I would get distracted and look at a different path or I strayed too far from the regulator that seemed to be broken.

The kit came with a diagram/layout of the electronics and paths on the board, so I started deciphering that as I looked at the board. It all started to click. At this point I started realising “hey there's none incoming, it's something higher up before the second voltage regulator”. This is a super obvious thing to experienced people, I'm sure, but I am just too new and dumb about this stuff.

So anyway, I started chasing the line from the successful 5V output of the first regulator. I finally come to the optional power switch holes on the board. The kit didn't come with a switch so I figured it must be optional. Nope! I was supposed to cut off a couple jumper pins and solder them into the holes, then put a jumper on them. Again, this is likely something super obvious to an experienced person, but that's not me!

So after a quick solder of the two jumper pins and a jumper, I plug in the board. After a second the green light comes on, and the display on the screen appears, although it's very dark. I'll debug that another day though, as I have no keyboard for the device yet (it's coming) and I'm just happy I got the board working!